Peter Gonzalez is a wide receiver at Pittsburgh Central Catholic High School. Weighing in at 190 pounds and standing 6’2″ tall, Peter is a dynamic football player with a bright future ahead of him. Set to graduate from Pittsburgh Central Catholic in 2024 with a current 4.5 GPA, Peter already has many accomplishments under his belt as well as aspirations surrounding what comes next.

Peter has strong family values, citing his father as someone he looks up to most. Peter’s dad is the person who spurred his love of football at an early age, as they went to games together, and it shaped his motivation and devotion towards the sport.

Peter’s Christian religion is a guiding light in his life, and it’s important to him that he honors his faith in all that he does.

Those closest to Peter describe him as easy-going, fun, highly-focused, encouraging, and – most of all – hardworking. This trait allows him to shine on and off the field.

Peter has several accomplishments under his belt. He’s recently been ranked as the 16th high school football prospect and second wide receiver prospect in the state. He’s already made a strong impression with his skills and commitment to the game.

Garnering attention from college athletic programs, he’s excited to continue to impress schools with his abilities.

To see Peter in action, check out his latest highlight reel. 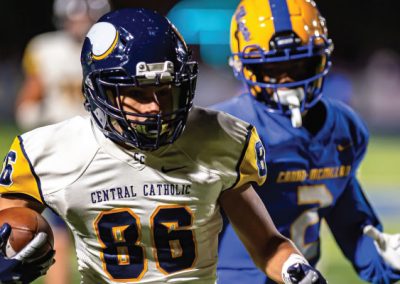 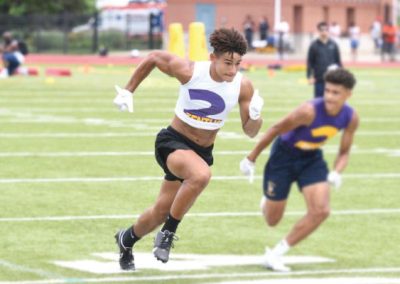 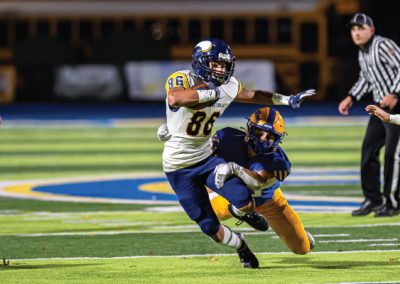 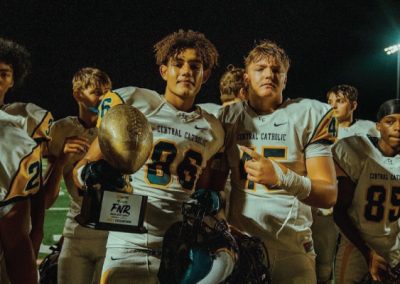 From the brief time working with Peter, you can immediately tell that he’s serious about his craft, approaching everything with a growth mindset. He effortlessly retains information and transfers it. His football skill set and overall size to athleticism ratio is impressive; his limits will be determined by him.

Beyond what Peter has already accomplished, he’s got big aspirations for his future. First, Peter wants to play at a Power 5 school.

Peter aspires to continue his football career at a more advanced level for a school where he feels he is an athletic and academic fit. He also wants to generate more buzz around his game.

Another aspiration he has is to win a WPIAL and PIAA state championship.

Peter desires to be a role model for younger kids and athletes. Having learned so much from his football experience thus far, he aims to inspire confidence in young athletes. He wants to help them overcome any feelings of self-doubt that may get in the way of their personal or athletic development.

The idea of working hard to achieve his dreams is a driving factor for Peter, and he hopes he relays that motivation through his actions on and off the field.

Want to get in touch with Peter? Fill out this form to reach him!